The younger sibling of PTSD: similarities and differences between complicated grief and posttraumatic stress disorder 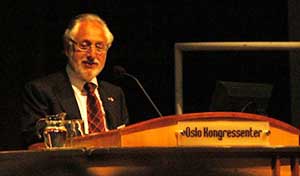 Professor Dr. Berthold Gersons contributed in an outstanding extent in quality and quantity to the field of psychotraumatology in Europe.

Current and past positions

Berthold Gersons (64) is since 2007 Distinguished AMC Professor, professor of Psychiatry University of Amsterdam and Senior Scientific Advisor Centrum '45. Till March 2007 he was chair of Psychiatry at the Academic Medical Center of the University of Amsterdam, and member of the executive board of AMC de Meren, a regional mental health organization with 1200 employees in Amsterdam. He has been professor for ambulatory and social psychiatry at the University of Utrecht from 1984 till 1991 and than moved to Amsterdam to become the central chair of psychiatry.

He has been trained as a psychoanalyst, in psychodynamic individual and group treatment, cognitive behavioural therapy and family therapy.

Contributions to research and practice

In 1980 he started research on trauma and PTSD in the police and he established the first self-help-team in Dutch police. 10% of Dutch police officers are today members of 'occupational support teams' after trauma. He developed the Brief Eclectic Psychotherapy (BEP) protocol of 16-sessions for police officers and other trauma-I victims which showed to be effective in randomised trials. It is included in the NICE-guidelines in 2005. His group also proved effectiveness of BEP on neurobiological criteria. In 1992 he was the chair of the first World Conference of the International Society for Traumatic Stress Studies in Amsterdam. After the El Al air crash disaster in the Bijlmermeer Amsterdam he became advisor to the city government on aftercare. He studied together with Dr. Ingrid Carlier the sequel of the disaster. They were part of the first researchers who discovered the damaging effects of debriefing. His group has recently shown how to avoid damaging effects of debriefing by avoiding focus on emotions. He has published more than 200 papers in national and international scientific journals and books and has lectured around 500, also in many countries all over the world.

From 2000 till 2005 he was appointed as advisor of the Minister of Health for the Firework Disaster of May 13, 2000 in Enschede, the Netherlands. Together with Prof. Rolf Kleber he was in charge of a six-year longitudinal study on the Enschede disaster including physical and mental health aspects. He published numerous papers on police-trauma, BEP, disaster, debriefing and assessment of trauma.
In 2004 he was appointed by the Secretary of Defence in the Board of Directors of the Dutch Veterans Institute and he still an advisory of the Veterans Institute. In 2005 he delivered the report to the Secretary of Defence 'Special mission; mental health care for the military and veterans'. Dutch Parliament approved the report and accordingly the military mental health services have been reshaped according to this blueprint. In 2005 he was visiting professor at the University of Zurich and he still member of the Faculty for the Masters in Traumatic Stress of the University of Zurich.
Since 2005 he is Advisor for psychosocial aspects of security of Dutch politicians, National Coordinator for Counterterrorism and he is advising politicians under threat in the Netherlands. In 2006 he founded and became President of the Dutch-speaking Society for Psychotrauma.

He has also been active in the field of social psychiatry since the 70-ties and advising the government. He helped to set up the first crisis-centre in Amsterdam in 1972. In the 80-ties he developed day-treatment as an alternative for 24-hour admission. In 1984 he was appointed by the city council as chairman of the Amsterdam mental health committee, who developed a blueprint for community based comprehensive mental health care for the city of Amsterdam. This 'Amsterdam model' has been implemented since the 90'ties and is still further developed.

In March 2007 he received the Royal Honour Officer in the Order of Oranje-Nassau from the Dutch Queen.

June 15, 2009 he received the 2009 Wolter de Loos Award for Distinguished Contribution to Psychotraumatology in Europe from the European Society for Traumatic Stress Studies, ESTSS.

Special report by Dart Center on “PTSD vs. PTSI: More Than A Name”