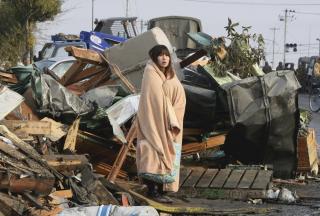 Notions of stoicism, community and acceptance of suffering are at the marrow of Japanese cultural identity. Its people will draw on those reserves as they face the challenges ahead.

Now that rescuers and news teams have reached the coastal areas in Miyagi and Fukushima, some sense of the staggering physical destruction wrought by Friday’s earthquake in Japan is beginning to emerge.  Whole villages and towns that once lined estuaries and inlets have been scoured off the map.

Tens of thousands of people are missing and hundreds of bodies are coming to light. Understandably, people watching the disaster from afar are trying to gauge how people in Japan are coping psychologically.

A full answer is clearly impossible at this stage, but the question is still worth raising, if only to bring out tacit assumptions. Is there any merit in what one BBC reporter called the “stereotype of the Japanese being stoical and just getting on with things”?

First it is better to use, rather than avoid, another apparent cliché of disaster reporting: Japan, including its wider diaspora, is currently in shock, and it is important to underline that.

So sudden and violent a transformation of the terrain, and such a loss of life, is bound to strain comprehension. On Friday, moments before 14:46, everything was as usual; minutes later, the country had entered what its prime minister called the worst crisis since its destruction during the Second World War.

Just the economic damage alone is certain to be disorienting. Japan, a country whose economy relies on manufacturing, now faces an unprecedented period of electricity rationing as a result of damage to key nuclear plants.

Nevertheless, many non-Japanese commentators have been struck by the apparent sense of orderly calm they have witnessed in footage coming out of the country and have found it hard to decode.

Japan has been hit both by an earthquake – more accurately, a complex sequence of shocks – and a colossally destructive tsunami, which was too close and too large to be defended against. And now, reports of radiation leaking from damaged nuclear power plants have added to the confusion of threats and stresses.

As one would expect, the almost surreal sense of life as usual was most evident in areas not directly affected by the flooding – Tokyo went back to work on Monday. But even in the tsunami-stricken north-east, along with pictures of people searching for relatives and in clear distress, there have been images of primary school teachers shepherding frightened children in rescue boats, with a determination to project a persona that suggested everything was fine, almost as if they were on regular outing to a park.

Similarly, the outside world has seen images of people near the troubled reactors in Fukushima queuing in a seemingly relaxed way to be tested for radiological contamination.

Such apparent calm is not necessarily evidence of a uniquely Japanese type of hardiness. In fact, scientific research from other mass-casualty disasters around the world shows that panic is more rare than we imagine. In traumatic situations people commonly experience elevated emotional states, but may appear quite restrained and calm on the surface.

Rapid swings in mood, periods of social withdrawal, or seeing sudden intrusive images of disturbing events replaying are all common reactions in the immediate aftermath of a disaster, even in people who are coping well. While some may find these disturbing, they usually subside of their own accord in the weeks that follow.

But is there any scientific data that backs up the idea that Japan is a particularly resilient culture, whose people are better able to weather these tides? Available evidence is sketchy and inconclusive. Some research found that people affected by the 1995 Kobe earthquake recovered more quickly than those in a comparable earthquake in Gujarat in India in 1991. The researchers suggested that that may have been because community groups in Japan were quicker to organise.

Certainly, the general literature on disaster response backs up the suggestion that active coping strategies, such as helping in the clean-up or looking after friends or relatives, are psychologically protective. Doing something, however small, helps to connect people and fight the creeping and corrosive sense of helplessness.

In Japan, working toward the welfare of the group has traditionally had more priority than the individual. The psychologist Hayao Kawai, in conversation with the novelist Haruki Murakami, once joked that teachers in Japan often leave the injunction "Be an individual" written up on classroom blackboards, because they fear that without such an explicit reminder students might find themselves unable to escape the cultural gravity of group-think.

However Kawai also suggested that the Japanese reluctance to individualise oneself may actually be protective in disaster situations. He noticed that the Japanese he worked with tended not to assume blame for arriving in a bad situation that they had no control over, whereas Americans often did.

These notions of resilience, community support and the ability to adjust oneself to suffering have a deep traction in Japan. They are at the marrow of how the Japanese see themselves.

This explains some of the irritation some of my Japanese friends have experienced while watching European television coverage over the last few days that has not taken this stoicism into account. Why, they wonder, did anchors in studios in Europe and America phone people in the areas unaffected by the tsunami and ask so insistently whether they had seen panic in the streets? That is not something they would have expected.

Part of that misunderstanding simply lies in the fact that those outside the country fail to appreciate the full scale of the preventive measures Japan has taken in earthquake-proofing its buildings and training its citizens from kindergarten age in survival drills.

But one friend, living in London with its notoriously delay-ridden transport system, was annoyed on day two of the disaster to hear newscasters detail the continuing delays on the Tokyo railway system, while failing to point out that just 16 hours after a magnitude 9.0 earthquake, most of the major arterial commuter lines into Tokyo were open again.

The problem, of course, is that the human and physical loss is so much more daunting in the tsunami-affected areas of the north-east. Even in secure areas, shortages of food and the nuclear situation are likely to further fray nerves as the crisis continues.

But confronted with all this, the Japanese may still have useful resources in their heritage that they can draw on. First, there is historical precedent. Japan has faced two extraordinary emotional cataclysms in the last 150 years: the forcible opening of its markets by Western powers in the 1850s and military defeat in 1945.

Prime Minister Naoto Kan referred to the latter in a speech on Monday, calling on each and every citizen to work together for a new Japan, just as the 1945 generation rebuilt Japan through considerable hardship and sacrifice.

The expression, sou iu mon da yo, ("It is just that kind of thing") with which people in Japan have been comforting themselves over the last few days, was typical of that generation, and, I was told, was one of the first things that a friend’s grandmother said after being evacuated from a village that was largely destroyed by the tsunami in Miyagi.

These attitudes have deeper underpinnings in language and religion. The expression, shoganai, ("It can’t be helped; we’ll just have to put up with it") is one of the first phrases foreigners learn in Japanese. Indeed, the whole grammar is written in something of an impersonal voice, implying that things just happen.

From Buddhism comes the doctrine that life is suffering – the First Noble Truth – and that attachment to the way things appear to be is illusory, as everything is subject to change.

More importantly still, perhaps, is the active attitude Buddhism has toward death. Japan is not a death-averse society in the way that many European Protestant societies are. There are, long, elaborate mourning rituals, and the newly dead are never far from the living. Instead, they are waiting to become full ancestors and are felt to have a guiding influence over those they left behind.

When someone dies in Japan, it is traditional to bring out the best photographs of the deceased to create a shrine, whereas in Britain, for instance, such visual reminders of separation may be too painful at first.

We know from the epidemiological impact on trauma that however well society as a whole deals with the disaster over the next few months, in the longer term there will be individuals who don’t do so well. Some may find it hard to escape from the impact of Friday, March 11, 2011. Even a small percentage of the 127 million people who dwell in this nation would still amount to a significant number.

Hurricane Katrina suggests the poorest and those who experience the greatest amount of resource loss are at particularly high risk of developing post-traumatic stress disorder. But regardless of circumstances, we can’t predict with certainty who may or may not be affected.

Many in Japan aren’t entirely comfortable with the Western scientific definition of traumatic stress. In 2004, when I interviewed survivors of Hiroshima for the BBC film, "Hiroshima," to commemorate the 60th anniversary of the atomic bombing, many of those I talked to dismissed the suggestion that they may have experienced any lingering traumatic impairment.

Then ten minutes later, one would be talking about how he used alcohol as self-medication against nightmares, and another about finding it hard to take her grandchildren to the swimming pool because she often saw bodies floating in the water as she had in 1945. It is important that the expectation that most will do well doesn’t lead to the marginalisation of  those who don’t, or having their experience downplayed.

The psychiatric relief teams working in the Kobe earthquake, however, found that people there who were  in continuing trouble were more willing to come forward for what they called kokoro no kea, ("Care for the heart”) a term that has some overlap with the Western notions of post-traumatic stress, something which may reflect a generational shift.

The reconstruction task ahead is immense, but the example of Hiroshima, now a vibrant city of 1.1 million people, is a testament to the ability of Japan to rebuild. This is a little known facet of that story: The atomic bomb was dropped on August 6, 1945; just three days later, on August 9, a team of railway workers, soldiers and volunteers managed to get the first streetcar running again along a 1-kilometre stretch of track that they had managed to resurrect in a city that had been destroyed.

INVITATION: CALL FOR BIDS TO HOST THE 18th European Conference on Traumatic Stress (2025)

Helene Flood Aaakvaag, PhD has been elected to the new ESTSS board as an individual members representative