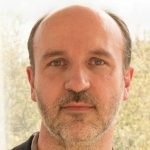 Gavin Rees is the director of Dart Centre Europe. Responsible for implementing the Centre’s work across Europe, Gavin runs workshops and discussion groups on trauma awareness, resilience and interviewing skills for working journalists and journalism students in a range of countries around the world. Prior to working at the Dart Centre, Gavin produced business and political news for US, British and Japanese news channels, and has worked on drama and documentary films for the BBC, Channel 4 and independent film companies. He was a leading producer on the BBC film Hiroshima, which won an  International Emmy in 2006. He is a visiting fellow in the Media School at Bournemouth University.